In the Space 1999 episode “War Games” Moon base Alpha approached a strange planet, As it did three Hawks originating from Earth approached. Commander Koenig gave the order to destroy them Anticipating an attack.
Another wave of Hawks strafed the base from another direction, the resulting attack put the Alphans’ survival in jeopardy.

The Hawks design is reminiscent of the Eagle. The ships shared the same production designer, Brian Johnson. however, the Hawk was a sleeker design that was unencumbered by the need to serve in utilitarian roles.
This ALL NEW kit of the starship features authentic detail and is based on the original filming miniature used in the production of the television program.

There are no reviews yet. 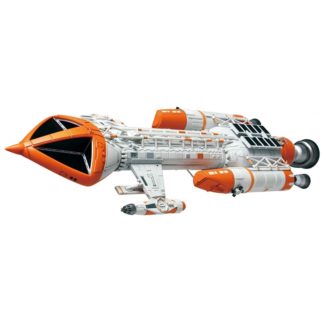